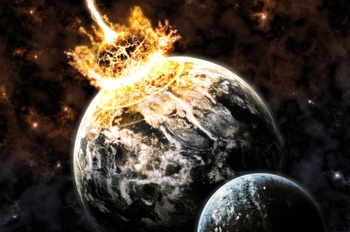 Okay, so they've spent the entire series talking about it, and it finally happens: The giant, crazy, blow-the-budget scene where they show the apocalypse.

Or, y'know, they open the movie with it. Whatever.

In an academic sense, this trope has a wide variety of uses, from Ending Tropes to the Cold Open and everywhere in between. Equally capable of introducing a setting or establishing a character, it can be used to underscore how brutal a situation has become, or render an Eldritch Abomination Deader Than Dead. Often an After the End scenario will have one as part of the flashback Backstory. When it comes right down to it, the only true constant between all the uses of this trope is the spectacular nature of the event itself.

This trope is the visual, descriptive embodiment of The End of the World as We Know It.note For when "Take Our Word for It" just isn't good enough. Said event will usually be on the Apocalypse How scale, but not always. Often invokes the Distant Reaction Shot, since that's the cleanest way to show something of this magnitude. If it's a recording in-story by a firsthand observer, it doubles as an Apocalyptic Log.

See also Apocalyptic Montage, Earth-Shattering Poster. Compare Storyboarding the Apocalypse, which uses a (generally hypothetical) description (with or without Spreading Disaster Map Graphic) of an apocalyptic event to create dramatic tension. Contrast Scenery Gorn, which has a rather specific narrative use. If the audience is Just Here for Godzilla, this is usually what they've come to see.

There are, of course, some very serious spoilers detailed below.