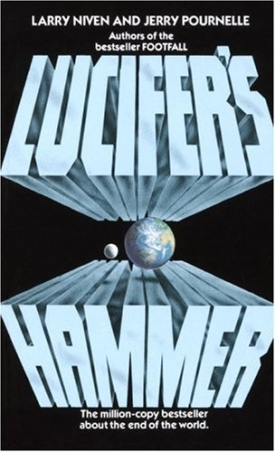 "After its close approach to the sun, the comet was a ghost of its old glory. Most of the volatile chemicals that once made up its mass had long sense been boiled away. But there was hope for it yet. If it could just make it back to the outer solar system, it could live again and become what it was. But it appears there is something in its way..."

Lucifer's Hammer is a post-apocalyptic science fiction novel by Larry Niven and Jerry Pournelle. The story details a cometary impact on Earth that causes the end of civilization as we know it, as well as the struggle to survive in the face of tsunamis, starvation, disease, a new ice age, and an army of cannibals in order to rebuild society.

The story is one of the best of its kind, and was nominated for the 1978 Hugo Award for Best Novel. A comic book adaptation was published in 1993.

Not to be confused with The Lucifer and Biscuit Hammer, which deals with a different planetary impact.