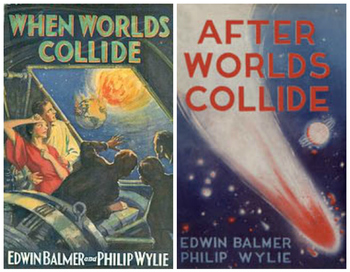 When Worlds Collide is a Speculative Fiction novel co-written by Philip Wylie (who also wrote the proto-superhero novel Gladiator) and Edwin Balmer. It was first published as a six-part serial between September 1932 and February 1933 in the "King of the Pulps", the magazine Blue Book.
Advertisement:

In South Africa, astronomer Sven Bronson discovers a pair of rogue planets speeding towards the solar system from the depths of interstellar space. The smaller Bronson Beta will enter a stable orbit around the Sun, but the gas giant Bronson Alpha will cause apocalyptic damage to the Earth through its gravitational influence, swing around the Sun, and finish off ol' Terra by smashing into it on its way out. It looks like humanity is doomed. But if "The League of the Last Days" can cross the gulf of space between Earth and Bronson Beta, some small fraction of the human race might just survive...

...and naturally, they do, since the sequel, After Worlds Collide, was also serialized between November 1933 and April 1934.

In 1951 producer George Pal followed up Destination Moon with an adaptation.

There was also a syndicated newspaper comic strip, Speed Spaulding