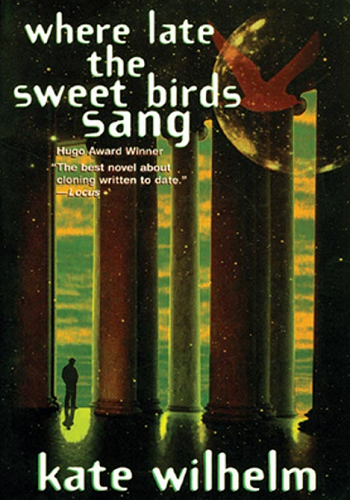 Where Late the Sweet Birds Sang is a novel by Kate Wilhelm. Set in the Shenandoah Valley, Virginia, it's divided chronologically into four sections. The first takes place 20 Minutes into the Future; the second an unspecified number of generations further on (which also places it After the End); the third about ten years later; and an epilogue a few decades after that.

The Character Focus for section one is David, a scientist, who returns to the Shenandoah Valley, and his family, in the wake of a global crisis. Crops are failing, mysterious diseases are showing up everywhere, and animals and people are becoming infertile. Working together with his old teacher, Walt, and other scientifically-trained members of his large extended family, David works to develop blight-resistant crops and plays a critical role in formulating cloning technologies first for animals, then for people. Testing later generations of clones, David and Walt discover that, while clones past the fifth generation are nonviable, the fourth and fifth generations produce greater numbers of fertile members, who can sexually reproduce.

They and the other "elders" (non-clones) assume that the clones share their feeling that sexual reproduction, and the resulting genetic diversity, is a desirable goal. When the first clones (fourth- and fifth-generation girls) become pregnant, David learns this assumption is mistaken. The clones instead intend to form a clone-based society, with the fertile members as mere fallbacks. David attempts to prevent this by destroying the cloning technology, but he is prevented, and subsequently exiled.

Section Two's Character Focus is Molly, implied to be the clone-descendant of David's cousin Celia. Like everyone else in the Valley, she is a member of a clone-family, and has five clone-"sisters," all identical to her, all of whose names all begin with "M." Like them, she is an artist, and her ability to accurately reproduce what she sees is the reason she is named to an expedition to the "outside world," specifically Washington, DC. She will produce maps and sketches that will help future expeditions to forage for the technological supplies the Valley urgently needs. Following the expedition, Molly finds that she has become an individual, unable to subordinate herself to the needs of her clone-family. She bonds with Ben, another member of the expedition who develops a similar problem. Their son, Mark, becomes the Character Focus of the third section and the epilogue.

As the only individual in the Valley, teenage Mark is a loner, but his ability to tolerate, and even thrive during, separation from others — along with the survival skills he learned from his mother and from books — makes him essential to the community, which is planning more foraging expeditions to meet their desperate need for supplies. Though he is incapable of fitting in with, or even of fully understanding, clone society, Mark does what he can to help. But eventually he realizes that his destiny, and any future humankind may have, lies elsewhere.

Winner of the 1977 Hugo Award for Best Novel.