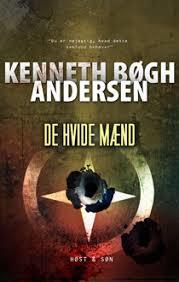 The White Men (Danish: De Hvide Mænd) is a Dystopian novel by the Danish author, Kenneth Bøgh Andersen, published in 2003.

In future Denmark, the country is ruled by a Fascist government that came to power after an Overpopulation Crisis. A one-child policy is strictly enforced, the possession of drugs, including alcohol is forbidden, and if you are in any way handicapped, chronically ill or crippled, over the age of 65, or fail to get a sufficiently high grade at your final exams, you are considered amongst the weak and unwanted and will be summarily executed by the titular White Men's Corps, the sinister and brutal enforces of the government's vicious laws. But all of this are just necessary steps to get Denmark safely through the crisis, or so claims the government.

Our protagonist, Edwin Georg Normann, is a 21-year-old former model student. Highly intelligent and once staled to pass his exam with the highest possible average, he finds himself plagued by doubt in the righteousness of the oppressive society and hunted by the ghosts of his past, and his grades is slowly slipping towards the lowest allowed average.