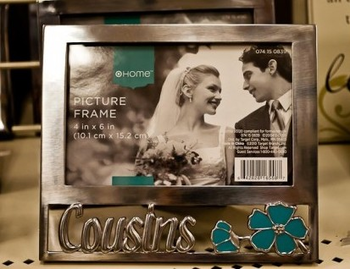 Well, they do look happy...
"If you're tired of beating around the bush, why not shake the family tree? A hot cousin might fall out."
— Stephen Colbert
Advertisement:

Romantic/sexual relationships between cousins (meaning, generally, first cousins — as in, the child of an aunt or uncle) are a phenomenon that has been more accepted in some cultures and eras than others. A great many cultures today accept it, including a majority of the industrialized world.

, since hominids usually lived in small nomadic bands with few available sexual partners. At the other end of the spectrum, much of the modern U.S.A. considers cousin marriage completely taboo, so Hilarity Ensues at the very mention of it. People from backwoods areas (especially the Appalachian Mountains) are often the preferred butt of many bad jokes as well as occasional bits of Self-Deprecation for the alleged prevalence of Kissing Cousins in their culture.

Despite the taboo, cousin marriages are legal in about half the states in the U.S.A., though not as much in the backwoods areas and more in the modern industrialized states: the opposite of what one might expect from hearing all those jokes.note Cue more joking that the backwoods states are the only ones where it happens enough to be worth banning. Legal or not, these marriages are still not very common due to the lingering cultural taboo. All U.S. states permit marriages between secondnote Though a few states, Kentucky being one, ban marriage between "double second cousins"—i.e., those who share a great-grandparent on both their mother's and father's sides of the family tree. and third cousins, but even these are looked at funny. In the UK, first cousin marriage is uncommon and would be regarded as rather odd, but it doesn't carry as much stigma as in the U.S., while second cousin marriages and beyond would be seen as unremarkable. In several other western countries, especially the ones that are majority Catholic, first cousins marriages were common and usually not considered a taboo; although it's starting to become more looked-down-upon in the modern age due to globalization and the importation of U.S. culture, such marriages are still quite common in rural areas. First cousin marriage is also considered acceptable in Japan, South India(states of Tamil Nadu, Kerala, Andhra Pradesh and Karnataka) and the Middle East.

Expect some strong Values Dissonance between the media from the US and other countries, and between certain modern works and works from the nineteenth century and earlier, when the taboo was sometimes non-existent or even inverted. Scholars still vigorously debate the question of why some cultures forbid cousin marriage while others permit or encourage it, but that's beyond the scope of this wiki.

According to both Oxford and Merriam-Webster's Dictionaries, the original definition of kissing cousins was simply a relative known well enough to be given a kiss in greeting, although this meaning has long since fallen by the wayside.

Check out Incest Is Relative for more closely related tropes.

Note: This trope is for cases of actual relationships between cousins. Cousincestuous subtext goes in Incest Subtext.