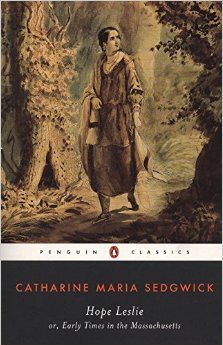 Hope Leslie, or, Early Times in the Massachusetts is a novel written in 1827 by Catharine Maria Sedgwick. It was highly successful and compared by many critics to The Last of the Mohicans. It is notable for containing themes that are seen today as feminist although it was written before the term "feminism" was coined, and for its promotion of tolerance for Native Americans.Hope Leslie is a generation-spanning historical romance set mainly in 1643. The central character is a Puritan girl living in the American colonies named Hope Leslie. The novel deals mainly with Hope's relationships with her distant cousin and crush, Everell Fletcher, a Native American girl she befriends named Magawisca, and her younger sister, Faith Leslie, who was kidnapped by Native Americans and assimilated into their tribe.