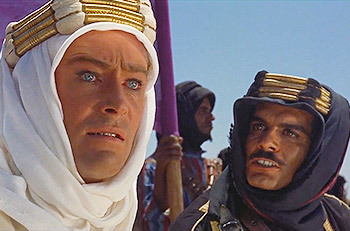 They don't call him Lawrence of Wales.
"Wisdom and sensitivity are inevitably possessed by any race, class, or ethnic or religious minority that has been misunderstood. Thrown into the company of such a group, the protagonist discovers the true meaning of life and sees through the sham of modern civilization."
— Definition of "Noble Savage Syndrome", Ebert's Bigger Little Movie Glossary
Advertisement:

Everyone sometimes feels that their ordinary modern life is rubbish, and that they would rather escape to an exotic place with a new identity. The Going Native trope plays to this fantasy by having a character lifted out of his typical environment and thrust into a new one, only to become a part of that new world. Characters who start as an imperialistic Jerkass with heavy prejudices against the native group are especially prone to Going Native. Not only do they embrace the people who were once alien, they come to loathe the familiar "civilization" to which they once belonged. Their loyalties change, and they will even fight for their new friends. As soon as they feel quite comfortable, possibly having fallen in love with a native and/or learned big lessons from a mentor figure, count on their old life to come messing with them. Optionally there might be an episode of being tempted back to their "evil old ways". Or they might just rise to the occasion as a Mighty Whitey.

This is also what can happen to a Foreign Ruling Class: they could take more and more of their subjects' culture until becoming entirely assimilated. In cases like these, these two tropes can heavily overlap with Led By The Outsider

Going Native is not restricted to known tribal cultures. It might involve characters involved with aliens, orcs, you name it. Overlaps may occur with Becoming the Mask. Oddly, it is almost never used in cases where it is the audience's group being joined by a more advanced figure, such as the Fifth Column in V (1983). Not to say it never happens, of course.

Most real-life successful native-goers start out as extremely adaptable (e.g. Lawrence of Arabia). Dramatic requirements might call for the character to be not this adaptable to make the story of his transformation more interesting. If the character becomes more successful in his new culture than he could have ever been back home, it's Like a Duck Takes to Water.

While often considered highly problematic in fiction and academics, it's not actually a bad thing in itself. During military actions in (or the exploitation of) foreign countries it can easily lead to conflicts of interests and the mainstream paradigm of social sciences is to keep observation from an insider perspective and an outsider perspective clearly separate. For individuals finding a new community to call their home, it is simply a case of successful integration. Individuals that have become well integrated into local society have come to be highly valued as interpreters and mediators, as opposed to mere translators.