Fanfic / The Difference One Man Can Make

After the Battle of Hogwarts, Harry Potter decided to travel the world. Twelve years later when a new threat attempts to destroy the progress made in Britain he returns home to deal with the situation. During the fight that puts down the small group of upstarts Harry finds himself in a world of ice and fire.
— Story summary 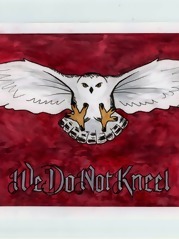 "We Have no kings here, no lords, except for those we choose. Even then, we never kneel."-Val, explaining the meaning behind the Norfolk words.
Advertisement:

The Difference One Man Can Make

is a Harry Potter-A Song of Ice and Fire Crossover fanfic by joen1801, that begins twelve years after the Battle of Hogwarts. Harry decided to Walk the Earth after learning Ginny was involved with Neville, and upon returning to England, an accident that happens while he helps stop a group of fanatic purebloods from taking over the Department of Mysteries ends up sending him to a cold land in the north of a continent called Westeros.

After some reflection, Harry decides to join the Free Folk, the inhabitants of the lands north of the Wall, and manages to take over Tormund Giantsbane's tribe, with the aim of making the most of his abilities to help the Free Folk make use of their great potential to establish a new civilization. However, when he learns that, once more, he has become the linchpin on which many people's destiny depends on, and a threat thought dead is making its comeback, Harry realizes he will have to strengthen his people, find allies and learn more about the world he lives in now, if he wants to ensure humanity's survival.

This story so far provides examples of: