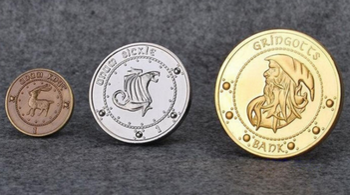 Knuts and sickles and galleons, oh my!
A popular convention for fictional works stuck in Medieval Stasis or otherwise "primitive" settings is to have money handled by the exchange of precious metals. In most of these cases, there will be different denominations of coins differentiated entirely by what metal they're made out of. Usually this takes the form of the Olympic metals — gold as the highest, silver second, and bronze last (though in coinage, copper is used instead of bronze more often than not). Sometimes more valuable metals are added above gold — commonly platinum.
Advertisement:

When using the Gold–Silver–Copper Standard, expect each denomination to be worth either 10 or 100 times the previous one. This is generally an Acceptable Break from Reality, as very few people would be interested in doing realistic calculations of "exchange rates" between coins, especially writers. In video games, collecting enough coins of a lower denomination will often cause them to somehow combine instantly: your purse with 99 bronze coins will suddenly contain only a single silver coin the instant you pick up one more bronze coin. Conversely, a higher-value coin can easily be turned into multiple coins of a lower denomination, so if you have exactly one gold coin and buy something that costs one copper, you'll be left with 99 silver and 99 copper coins even if it's unlikely that the merchant would have that much change on them.

The trope title is a reference to the gold standard

, when paper money is set to be worth a fixed amount of gold, but the trope is otherwise unrelated to the concept. See the analysis page for more information on the real-world implications of the trope.

When the money is called something other than [metal] piece or [metal] coin, it's also a Fictional Currency. Tasty Gold is related, for checking the purity of the gold coins. Hear Me the Money is historically used to test silver coins. Often a Global Currency, which is understandable, as the value in the coins comes from the precious metal itself. For settings that skip copper and silver to jump straight to gold, see Cheap Gold Coins.