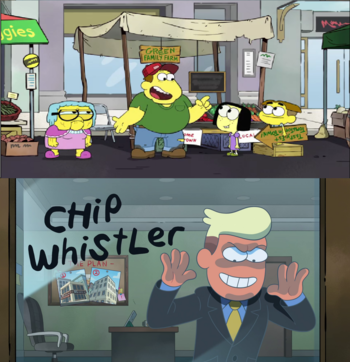 Above, a family of farmers selling their wares. Below, a spoiled inheritor.
"How do you want to make your fortune? By being a conman like Rockerduck? A shifty operator like Goldie? Or an industrious, resourceful, self-made man like your dear uncle?"
— Scrooge McDuck, DuckTales (2017), "The Outlaw Scrooge McDuck"
Advertisement:

Capitalism, by definition, is an economic system where a country's trade is controlled by private owners. Simply put, making a business for oneself. Bad News: people can take advantage of this system to hoard money they've made or relatives/predecessors made. Good News: People can work hard to earn a place for themselves this way.

The trope depicts a clashing of two businesses taking advantage of capitalism, but give energies as different as night and day. One will be depicted as honest, hard-working, and caring about their business and any partners that they have. The latter will be greedy, shady, and see partners and employees as tools.

More often than not, this trope depicts the former as a small business and the latter as a big business or someone who merely inherited their business. It can also depict people of the same business with different ideologies.

As things tend to be more grey in the real world and not everything is known to public eye, combined with the divided opinion of capitalism, No Real Life Examples, Please!

We thought employees were our most valuable resource. Well, it turns out we were wrong. You come in at ninth, after the carbon paper.
I'm almost afraid to ask what came in at seventh.