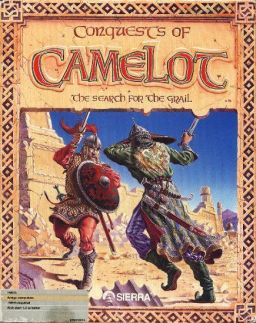 Conquests of Camelot: The Search for the Grail is a 1989 Adventure Game produced by screenwriter Christy Marx (of Jem fame) and Peter Ledger and distributed by Sierra On-Line. It produced one sequel, Conquests of the Longbow: The Legend of Robin Hood.
Advertisement:

You play as Arthur, King of Camelot, on a quest to find both the Holy Grail and three of his knights, who have gone missing: Sir Galahad, Sir Gawain, and Sir Lancelot. The gameplay is atypical of '80s Sierra, with many arcade elements aside from their regular puzzles.