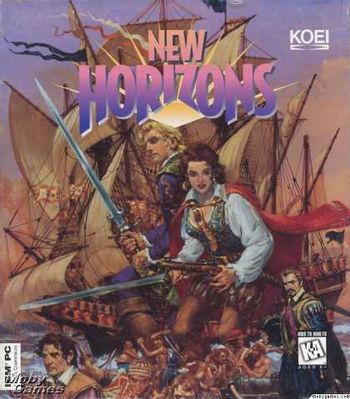 The second installment of the Uncharted Waters series by Koei, New Horizons was released in 1994 for PC-98, Super Nintendo Entertainment System, and Sega Genesis and later ported to PC, Sega Saturn, and PlayStation. It was also the last installment to be officially translated into English until the Uncharted Waters Online beta launched in 2010.
Advertisement:

Like the original game, UWNH is a Wide-Open Sandbox with RPG Elements, offering you the world's entire oceans to explore. The trading and combat mechanics remain mostly the same with a few new tweaks, but the exploration mode of the game was completely revamped: you now gain fame not only by discovering remote ports but also by searching native villages for unique discoveries, ranging from geographical or cultural wonders to exotic plants and animals. You can then sell these discoveries to the highest bidder, as well as make maps of your voyages and sell them to cartographer guilds for a nifty profit.

Storywise, the second game takes place some 20 years after the first one and moves away from a single protagonist to follow six new main characters. Each of them hails from a different nation (England, Holland, and Italy are added to the first game's Portugal, Spain, and Turkey as major sea powers) and has a unique and sometimes overlapping storyline. Additionally, there are now three kinds of fame: explorer (gained by discovering world wonders and remote ports and selling maps), piracy (gained by defeating enemy fleets, even if it is not, technically, piracy), and trade (gained by investing large sums into ports and fulfilling fetch quests), with each character having to build up one of them to advance their respective story.

The game has a character sheet. Please add put character-related tropes there!

Like the original game, New Horizons can be downloaded from various internet sites like Abandonia.com and runs smoothly in DOSBox. The SNES port was also released on Wii and Wii U Virtual Console.