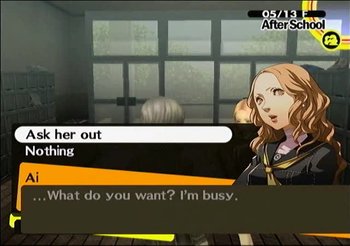 It ain't going to be easy, believe us.
"I love it when women fight over me..."
— Commander Shepard, Mass Effect
Advertisement:

An optional Romance Arc sidequest in many Role Playing Games wherein the Player Character enters a romantic relationship with an NPC (usually, but not always, one of their party members). Sometimes it's a full-blown quest, sometimes just a series of dialogues with the NPC. Sometimes you can screw everything up with wrong dialogue decisions, sometimes you can't. May or may not involve sex upon completion. The term "Romance Sidequest" is more often used in reference to Western RPGs, whereas the term "Dating Sim Elements" would more often be used in reference to Eastern RPGs.

In the earliest examples, the number of female love interests was often higher than that of male ones, likely because Most Gamers Are Male, but the most recent trends gravitate toward gender parity. Also, most romance sidequests in older games were heterosexual, to avoid offending Moral Guardians, and, again, because most gamers (and writers) are (heterosexual) males. This, too, has been on decline in recent games and a Gay Option is often included nowadays (sometimes to the point of Everyone Is Bi). Romancing multiple characters at once is usually impossible, except on the early stages, after which you "must make a decision".

In contrast to Western RPGs, their Japanese counterparts usually tend to integrate the romance into the main story rather than move it to sidequests. Some, with their love for linearity, tend to pair The Hero up with one specific girl in the course of the story, into which this sub-plot is rigidly integrated. Others tend to incorporate a Relationship Values system to determine which character has a romantic relationship with who. The Japanese are also responsible for inventing the genre of games that consist entirely of romance sidequests: Dating Sim (incidentally, some gamers slap this genre label onto any game that includes romance with NPCs).

Subtrope of Companion-Specific Sidequest. Related tropes are Relationship Values that are sometimes interchangeable with (or a prerequisite to) a Romance Sidequest and Optional Sexual Encounter which this sidequest can but might not culminate in. Alternatively, if the PC and their love interest end up having children, see And Your Reward Is Parenthood. If the PC's chosen love interest has a specific role in the story outside of the romance subplot, it may overlap with Static Role, Exchangeable Character. Also related is the Match Maker Quest, when the PC does this for out of party NPCs. See also Romance Game for when romance is the main focus of the game.

See also our guide on how to Write a Romance Sidequest.

BioWare is undoubtedly the Trope Codifier among Western RPGs. As far as Western RPGs are concerned, this trope is found mostly either in their own games, or games influenced by them.