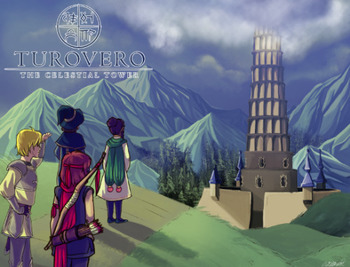 What will you risk to make the light of truth shine brightly once again?
Advertisement:

The world was created by four benevolent gods, who ruled together in harmony until the Dark One, a being of pure malice and despair, deposed them and began to spread its hateful influence. The only hope lies at the top of Turovero, the tower that reaches to the heavens.

Four brave adventurers - Sigurd the knight, Leilia the druid, Edric the mage, and Ruby the thief - have taken it upon themselves to make the perilous climb in order to oust the Dark One and return hope to the world. But what seems like a straightforward journey to defeat the villain and save the world turns into something much, much more, and our heroes may not be prepared for what they find at the summit of Turovero. Can they face the truths of the world that lie at the top of the tower and triumph over despair once and for all?

Turovero: The Celestial Tower can be played for free and downloaded here

With that in mind...