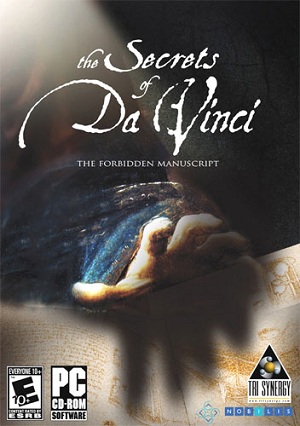 Secrets of da Vinci: The Forbidden Manuscript is a PC adventure game from Kheops Studios. You play Valdo, an apprentice artist in the Middle Ages, who has been hired by a mysterious individual to infiltrate Cloux Manor in the French countryside. There, he is to charm the lady of the manor, Marie Babou, allegedly the mistress of the King of France. This is to distract her from Valdo's real mission — to locate a lost book of writings by Leonardo da Vinci, who spent his final years in the manor. But all is not as it seems, and soon Valdo realizes that finding da Vinci's manuscript is necessary not just to collect his payoff, but to save his own life. Everyone around him, from Babou to the King of France himself, has their own hidden agenda, and there's more at stake than he ever imagined.
Advertisement:

Forbidden Manuscript is a puzzle-based game, where you must use clues and objects around you to slowly piece together the reality of what's happening in the manor. The building is full of secrets to be uncovered.