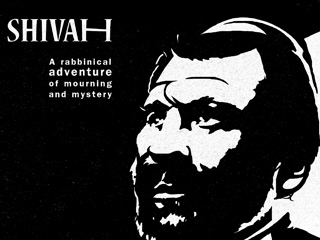 Is there anything more to say?

Sometimes the line between salvation and damnation is a mighty fine one.
Advertisement:

Rabbi Russell Stone is a conservative Jew who is slowly dying inside. His congregation has mostly left him, his synagogue is falling apart, and he is starting to lose faith in God's benevolence. Then, one day, he receives a bit of good news, albeit of the bittersweet variety: A former member of his congregation has died, and left him thousands of dollars with which to pay his overdue rents and keep his synagogue together... there are, however, a few problems.

The dead man, Jack Lauder, is someone from whom Stone had been estranged for years, so it was quite odd that Lauder would mention Stone in his will. Furthermore, Lauder was murdered, and Stone is a suspect.

Rather than take the money and quietly accept it, Stone decides that he will investigate Jack Lauder's death himself, to clear his name and find out what really happened. To start, he'll make a Shivah call on Rajshree Lauder, Jack's widow...

The Shivah is a Wadjet Eye Games project from the mind of Dave Gilbert. For other Wadjet Eye games taking place in the same universe, see The Blackwell Series and Unavowed. Originally released in September 2006, the game got a Updated Re-release in November 2013 with enhanced graphics and new music. This version is called The Shivah: Kosher Edition.