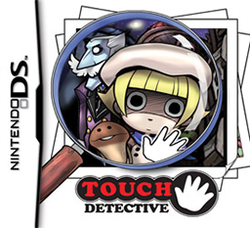 Touch Detective (Mystery Detective in most of Europe) and its sequel, Touch Detective 2½, are games made by Success, and released for the Nintendo DS in 2006 and 2007. In both titles, the player takes control of a young girl named Mackenzie, who inherited a detective agency from her father and wants to become a world-famous sleuth. Now add in Funny Animals, walking fungi, zombies that act like normal people and just plain old wackiness, and you have Touch Detective in a nutshell.

The first game's plot is comprised of Mackenzie solving four separate mysteries in order to apply to the Great Detective Society. The second has a more connected plot, with Mackenzie constantly coming up against the Gentleman Thief known as the Cornstalker and trying to unravel a side mystery involving an ancient race of aliens.

In addition to puzzle game spin-offs starring Mackenzie's assistant Funghi, a third game in the main series was released in May 2014 (only in Japan) on the Nintendo 3DS, titled Touch Detective Rising 3: Does Funghi Dream of Bananas?