In the Name of the Moon 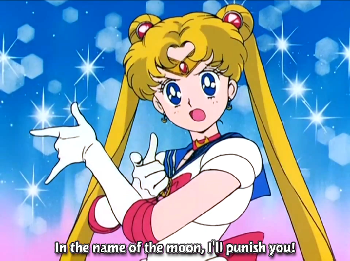 Before the Magical Girl confronts the Monster of the Week, she invariably issues a formal challenge involving an always-repeated Catchphrase and some topical variant. Reused every week as Stock Footage, typically following the Transformation Sequence (not preceding it) and against some sort of symbolic background. A signature pose and/or gesture generally accompanies the declaration, and there may be Dramatic Wind involved. Frequently, the Magical Girl somehow knows the right formula to say directly from her first or second battle, even if she fumbles and is otherwise unsure of her powers.

Note that, unlike By the Power of Grayskull!, the speech doesn't trigger, activate, or otherwise have anything to do with the Magical Girl's powers. Instead, it's meant to demonstrate the righteousness of her cause and the amount of ass-whup she's about to uncork. (Don't expect anyone to attack the hero during this speech, by the way. Talking Is a Free Action).

This isn't just a Magical Girl thing, though... Heroes of every stripe have opened a battle with a signature phrase or speech, a bold declaration of purpose. Even some villains have taken up this habit, loudly spitting their purpose at the fools who would dare stand against them.

Named after the challenge Catchphrase that Usagi always utters in every Sailor Moon battle. A type of post-Invocation, related to other forms of Word Power. Contrast Battle Cry, which is often shorter (but louder) and uttered just before or during the fight. Compare Transformation Name Announcement, Incoming Ham, Leitmotif and can sometimes qualify as a Badass Boast or Badass Creed.

Simon performs an epic speech while transforming the Cathedral Terra into the Super Galaxy Gurren Lagann.

Simon performs an epic speech while transforming the Cathedral Terra into the Super Galaxy Gurren Lagann.