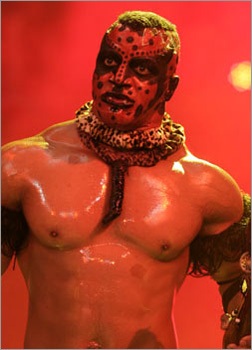 He's coming to get you!

I'm the BOOGEYMAN!...And I'm coming to GET YOU!

Martin "Marty" Wright (born July 15, 1964) is an American actor and Professional Wrestler best known for his time in WWE from 2005-2009 as The Boogeyman. Wright had tried out for WWE Tough Enough but was rejected after he admitted that he had lied about his age. Despite this, he got a developmental deal and was assigned to WWE's farm league Ohio Valley Wrestling, who ran a storyline about him snooping around and causing mischief on their property. In July of 2005, vignettes started airing on WWE SmackDown! promoting "The Boogeyman," all of which ended with "I'm the Boogeyman, and I'm coming to get you!".

On the October 18th episode, Palmer Cannon (real name Brian Mailhot, aka New England indy wrestler Brian Black), in his role as UPN Network representative, told WWE SmackDown General Manager Mr. Theodore R. Long that The Boogeyman was going to be a new show on the network, then explained that something had "happened on the set," but that they had a multi-year holding deal with the guy who was supposed to be the star and that in his opinion "the Boogeyman" would be a great addition for Smackdown, then introducing Long to the Boogeyman himself. Boogeyman recited a shortened version of the "Never Sleep Again" chant from A Nightmare On Elm Street, substituting himself for Freddy Krueger, before smashing a clock over his own head and saying, "I'm the Boogeyman, and I'm coming to get you!" Boogeyman would compete on SmackDown! and ECW TV from December 2005 to March 2009.

Boogeyman would win his first title belt in 2015, becoming one half of the Alabama Wrestling Federation's tag team champions with Bobby Lashley

Not to be confused with the 1980 horror film The Boogey Man. For the imaginary being used to frighten children, see Things That Go "Bump" in the Night.

"THE BOOGEYMAN is coming to get you if you don't read these tropes!":