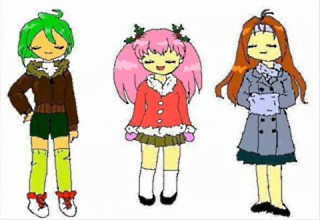 Announcer: "We totally swear it's not a Sailor Moon knockoff."
Momoko: "So if you don't watch it, in the name of, uh, marriage, I'll punish you!"

The Abridged Series of Wedding Peach by TokuTenshi

. Like Yu Yu Hakusho Abridged, this seems to focus a bit more on the characters, with fewer Lampshade Hangings than a typical abridged series.

The key to much of Wedding Peach Abridged's charm and humor is the hostile, ambiguous and unstable relationship of its parts to the whole. The show is very sensitive to the multiple genres and source materials co-existing uneasily alongside one another. The series itself is primarily in the genre of the Abridged Series (a genre that is by definition derivative), but the original Wedding Peach is imputed to be a second rate Sailor Moon knock-off (as opposed to a first rate Sailor Moon knock-off); therefore, the show exists precariously as a knock-off of a knock-off. But instead of being weighed down by the anxiety of influence, it is exactly its derivative nature that Wedding Peach Abridged manages to celebrate through incisive self-parodying, fresh writing, and strong characterization.