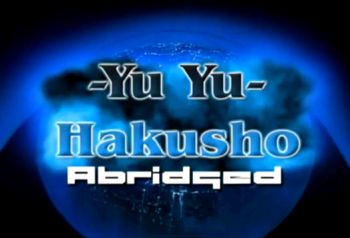 Elder Toguro: So let me get this straight... you're paying us... out of your own pocket... to make a little girl cry?'''
Tarukane: Correct.
Elder Toguro: (Beat) I F**KING LOVE BEING A DEMON.'''
Advertisement:

An Abridged Series based on YuYu Hakusho, by Lanipatornote It's pronounced lan-ee-pah-tor (emphasis on the last syllable), not lan-ee-pay-ter.. His YouTube account can be found here

This set itself apart from other abridged series by focusing more on playing around with the characters rather than mocking the tropes of the shows. It has plenty of the latter kind of humor, though.

Lanipator also snubbed LittleKuriboh in the famous incident that triggered The War of the Abridged Series Creators.

Has been on hiatus for a while its creator is preoccupied with higher matters.