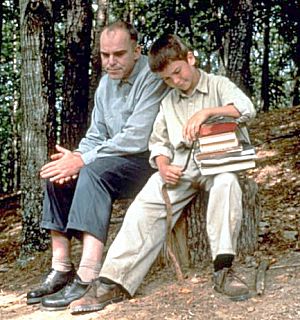 "Some folks call it a sling blade, I call it a kaiser blade. It's kindly a long, wood handle, kind of like an axe handle. With a long blade on it shaped kinda like a bananer. Mhm. Sharp on one edge, and dull on the other. Mhm. It's what the highway boys use to cut down weeds and whatnot."
— Karl Childers
Advertisement:

A 1996 drama film directed, written and starring Billy Bob Thornton, based on a short film called Some Folks Call It a Sling Blade, in which he also starred.

The story's about a mentally challenged man named Karl Childers who, around the age of 12, butchered his mother and her lover with the titular sling blade, because he had always learned from his parents that having sex was wrong (a detail shown in the script and seen in the short film). He was put up in a state mental hospital in Arkansas; our observation of Karl begins 25 years later when he's about to be released.

John Ritter and Dwight Yoakam co-star in the film, and Robert Duvall has a brief cameo as Karl's father.