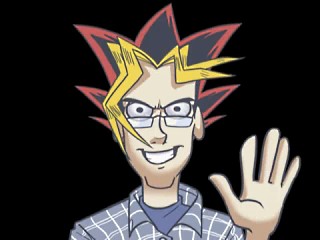 Let there be abridged!
"I mean, who the hell does he think he is? He's nobody! All he did was spend most of his free time making a series of amusing cartoon videos available to the public, completely free of charge!"
Advertisement:

Few people can be credited with starting an entire genre. In 1818, Mary Shelley wrote Frankenstein, launching the entire field of Science Fiction. In 1841, Edgar Allan Poe wrote "The Murders in the Rue Morgue," singlehandedly creating the Detective-Story genre.

Later on he started Naruto: The Abridged Comedy Fandub Spoof Series Show, first as an April Fools' Day prank, but then decided to make some more.

He also has a version of Dan Green, and plays him as an egotistical jerk who thinks Girls Have Cooties.

His YouTube account (which was originally meant as an in-character account for the Abridged Series version of Yugi, but was appropriated by LittleKuriboh himself after his original account was banned) can usually be seen here,

except it has an unfortunate tendency to get banned. Current Status: not banned.

account, which he frequently updates. He got married to West Coast voice actor Marin Miller (who has had guest appearances on his work way before that). They also now have a Patreon page.

He is also associated with Team Four Star, the group behind Dragon Ball Z Abridged. He's also made at least two guest appearances on Atop the Fourth Wall, two on The Spoony Experiment, and three on The Nostalgia Critic'. First in his review of Ponyo on the Cliff by the Sea the Top 11 Strangest but Best Couples and most recently co-reviewing Dragonball Evolution with him and MasakoX.

He is a fan of The Slender Man Mythos, following Everyman HYBRID and taunting HABIT every chance he gets, and occasionally doing Let's Plays with the cast of Marble Hornets. Heart of the Cards help him.

Roles in other projects: