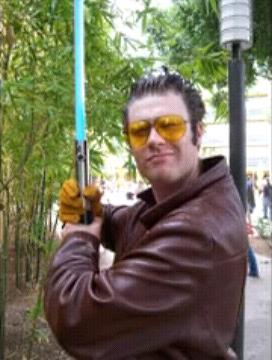 The Force is strong with this geek.note Yes, we know he's Cosplaying Travis Touchdown.
"In this world, Is the destiny of mankind controlled by some transcendental entity or trope? Is it like the Hand of God, editing from above? At least it is true that man has no control, even over his own videos... because Bandai will ban him for copyright infringement."
—Schwarzwald'snote  a role hbi plays first line from Big O Abridged Episode 4.
Advertisement:

Possibly the rarest thing among Abridged Series is to actually complete one. Many are justified in not doing so because the creators choose Long-Runners to spoof. hbi2k

has done the even more rare accomplishment of completing three series.

hbi also has videos where he gives answers on questions he's asked frequently. Sure Lanipator did such videos first, but hbi admits that right off the bat.

hbi2k was the first to release legitimate commentaries on his videos. He finished his Berserk Abridged and Gantz Abridged commentaries and as of 2010 is releasing commentaries for Vision of Escaflowne Abridged.

He was also part of Team Four Star (he voiced several supporting and minor characters on Dragon Ball Z Abridged, and he's the voice of Father Alexander Anderson on Hellsing Ultimate Abridged), and was an indirect instigator in The War of the Abridged Series Creators.

He also used to be a troper.