On the last episode of TV Tropes Z.... 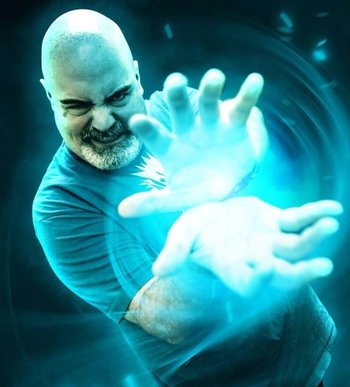 Bald and so very awesome.
Advertisement:

He is the champion of Justice, The defender of what is right!! THE GREAT SAIYAMAN!!!

Kyle Henry Hebertnote his last name is French and pronounced "Ay-bair" (born June 14, 1969) is a voice actor who originally did work for Funimation, which is in Texas. His most notable roles are Teen Gohan and the 2nd Narrator in Dragon Ball Z. Soon afterward he started working in California dubs. He's recognizable by his gruff and suave tone present in many of the characters he voices.

As stated above, he is the dub voice of Kamina in Gurren Lagann. Naturally, due to Kamina's Memetic Badass status, this just made him much more popular. He's present at many anime conventions and does a lot of Q&A sessions with his former FUNimation compatriots.

He's also an Internet star thanks to not only his role as Sosuke Aizen, but also due to his role as Wario in fellow voice actor Matthew Mercer's web series There Will Be Brawl. He also hosts his own podcast

(yes, named after Hebert's baldness), along with Indie-Rock musician Otherworld Steve. The podcast is not only supported by another podcast (hosted by Canadian voice actor Trevor Devall), but also supports yet another podcast, hosted by MasakoX and other The Abridged Series creators.

He is married to Christina Louise, an author whom goes by the pen name Ryter Rong.

My voice roles would break my vocal chords, WHO DECIDED THAT?:

HOW DOES IT FEEL TO BE LOOKED DOWN UPON, BY MY TROPES?:

In a vision that feels neither real nor dreamed, Robin and Chrom defeat the mage Validar. But in the vision's last moments, events take an unexpected turn.

In a vision that feels neither real nor dreamed, Robin and Chrom defeat the mage Validar. But in the vision's last moments, events take an unexpected turn.