Western Animation / Rolling with the Ronks! 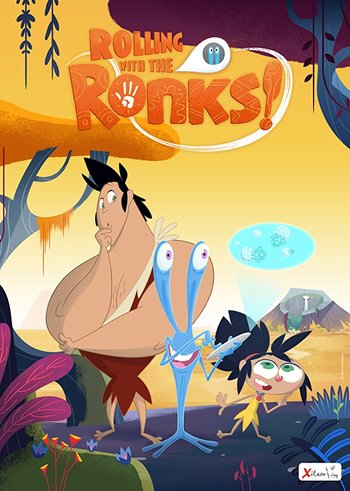 The main trio.note From left to right: Walter, Flash and Mila.
Advertisement:

Rolling with the Ronks! (French: Bienvenue chez les Ronks !) is a cartoon co-created by Olivier-Jean Marie and Charles Vaucelle, and produced by Xilam (for Space Goofs, Shuriken School and Oggy and the Cockroaches fame). It focuses on a sensitive alien named Flash, who is sent to the Ronk tribe on Earth to introduce them to various technology—but Darwin's ancestors don't seem ready to go to such a radical (re-)evolution. There, he befriends (and lives with) a cave girl named Mila and her uncle, Walter. Other notable characters include the chief of the Ronk tribe Mama, and the Big Bad Mormagnon, with his pet lizard Godzi.

Rolling with the Ronks! provides examples of: