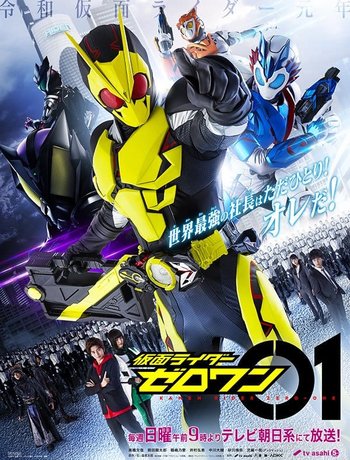 "There's only one person who could be the strongest company President! And that's me!"
The age of the HumaGear, where robots imbued with Artificial Intelligence work in most fields.
The young President of the world's top A.I. company stands to protect humanity!
Advertisement:

Kamen Rider Zero-One is the 2019-2020 entry in the Kamen Rider series, the first series in the Reiwa Era

and the thirtieth overall. It debuted on September 1, 2019, airing alongside Kishiryu Sentai Ryusoulger, and later, Mashin Sentai Kiramager in the Super Hero Time line-up. It ended on August 30, 2020, and was succeeded by Kamen Rider Saber.

Set in the year 2019 of the New Era (N.E.) calendar, the world has made vast advancements in Artificial Intelligence and created lifelike humanoid robots to supplement every role in society. In Japan, the number-one corporation at the top of the market is Hiden Intelligence, who produce a bestselling model called HumaGear. However, a cyber-terrorist organization called MetsubouJinrai.net ("DownfallThunderclap.net") have begun to stage terrorist attacks by hacking the HumaGears and turning them into weapons of mass destruction known as Magia, all in an effort to force a technological singularity where A.I.s would surpass and supplant humanity.

After the passing of Hiden Intelligence founder Korenosuke Hiden, his last will unexpectedly names his grandson Aruto as the next company president. Although Aruto would rather be a comedian than a businessman, he takes up the role after witnessing an attack by MetsubouJinrai.net firsthand. With the position comes the Hiden Zero-One Driver, a belt DNA-locked to the current President of Hiden Intelligence that allows him to transform into Kamen Rider Zero-One.

And oh, it has a kick ass opening theme from Takanori Nishikawa, AKA T.M.Revolution.note the guy who performed the original version of Hot Limit, otherwise known in the west as We Drink Retalin

The show was Cut Short due to the COVID-19 Pandemic, with the number of episodes being dialed back to 45. This resulted in a finale that left little resolved and the intended summer movie Kamen Rider Zero-One: REAL×TIME being pushed to a winter release and serving as a sort of Grand Finale instead.

As part of the franchise's 50th anniversary, Shout! Factory announced both Zero-One and Kamen Rider Ryuki would be licensed in the west as part of their TokuSHOUTsu channel and on their website, which can be watched here

. In addition, Zero-One was the first Kamen Rider series to get a proper home video English release with a Blu-Ray release on January 25, 2022.

There's only one person who could list these tropes! And that's me!

Shine on! I may be the president, but I'm also a shiny new hire! Yes! It must be me, Aruto!
Feedback

In one of the most needlessly cruel acts in the entire series, Horobi heartlessly murders Is when she tries to reach out to him.

In one of the most needlessly cruel acts in the entire series, Horobi heartlessly murders Is when she tries to reach out to him.