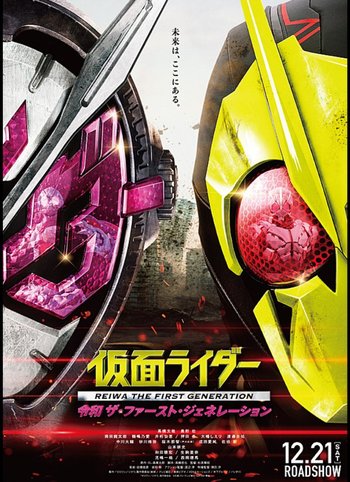 "What lies ahead between two intersecting worlds?"
Advertisement:

Kamen Rider: Reiwa The First Generation is the eleventh annual Kamen Rider Movie War crossover film and the first of the Reiwa era, serving as a crossover between Kamen Rider Zi-O and Kamen Rider Zero-One. It was released on December 21, 2019. It was later released internationally on April 7, 2021 through Toei's official YouTube channel, and can be found here

Twelve years ago, the Daybreak Town accident set in motion a chain of events that would lead to Aruto Hiden becoming Kamen Rider Zero-One to battle the people that would attempt to use HumaGears for evil.

Until it was all undone.

Under the pretense that they seek to erase the losses of that day, a new Time Jacker by the name of Finis travels to the past of Aruto's world, creating the Zero-One Anotherwatch and entrusting it to Korenosuke Hiden's secretary, Will. Now Another Zero-One, Will prematurely murders Korenosuke and takes over Hiden Intelligence, rallying every single HumaGear to declare a Robot War on humanity.

Now without Zero-One's powers or even his role as Hiden's company president, Aruto suddenly finds himself in a dystopian future where humans are oppressed by the very androids his grandfather had created so many years ago, and to make matters worse, his father figure Soreo Hiden has now become Kamen Rider Ichi-Gata, a turquoise Evil Knockoff of Zero-One powered by a Zetsumerisekey and a custom ZetsumeRiser to serve as a protector of HumaGears while Another Zero-One declares war against the human race.

Luckily, Aruto isn't alone. Is is still by his side even as a complete nobody in this new timeline, and Sougo, Geiz, and Woz are in hot pursuit against Finis's attempts to resume the chaos Swartz sought to bring upon their own world. Together, the four learn not only the truth of what brought them altogether and how Aruto became Zero-One, but also what it truly means to live for the present and change the future.

Tropes that appear in this work: