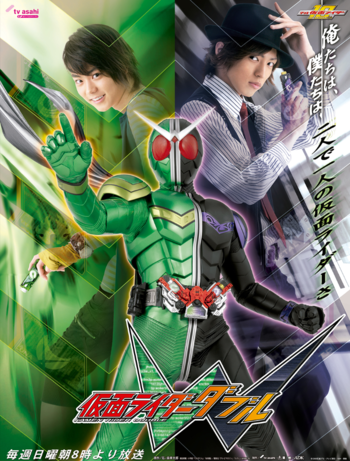 "We are the two-in-one Kamen Rider!"

Kamen Rider W (W is pronounced as "Double") is the second Kamen Rider series of 2009 and the eleventh entry of the franchise's Heisei Era. It aired alongside Super Sentai shows Samurai Sentai Shinkenger and then Tensou Sentai Goseiger in the Super Hero Time block.

Shotaro Hidari is a Private Detective who imagines his life as something straight out of a Hardboiled Detective novel. His partner is a boy called Philip, a mysterious researcher able to psychically connect to a collection of all the world's knowledge.

Together with their landlord and self-proclaimed "chief" Akiko Narumi, they operate the Narumi Detective Agency in the "Windy City", Fuuto. Their speciality is solving supernatural crimes committed by Dopants: people who transform into monstrous forms using corruptive Transformation Trinkets called Gaia Memories.

To combat this threat, Shotaro and Philip use their own set of purified Gaia Memories and their Double Drivers to fuse into the world's first "two-in-one" Kamen Rider: Kamen Rider Double.

As the story unfolds, Shotaro and Philip slowly uncover the secrets behind the latter's forgotten past, contend with a Hot-Blooded police officer on a quest of personal vengeance, and track down the source of the Gaia Memories that are being manufactured and sold in the shadows of Fuuto: the enigmatic "Museum" organization, controlled by the Sonozaki Family.

Shows strong influence from 1972 Manga-turned-Toku Choujin Barom 1, Hardboiled Detective fiction, Cyberpunk, and madcap comedy— making the series as much a matter of fusion as its Rider.

Note: The name of the show in Japanese uses the English letter W and reads it as "Daburu"/"Double". When the show first came out, it was referred to as Kamen Rider Double as shown in the English name given in the logo, but later releases have it as Kamen Rider W in English for no discernable reason.

Voted #2 series in the Heisei era and #2 product overall in NHK’s All Kamen Rider Popularity Ranking.

Now, count up your Tropes!

When fighting the Weather Dopant, Shotaro is backed into a corner, runs out of options and attempts to do a Twin Maximum, much to Philip's horror and warnings. The attack is so powerful, it lights Shotaro on fire and severely injures him.

When fighting the Weather Dopant, Shotaro is backed into a corner, runs out of options and attempts to do a Twin Maximum, much to Philip's horror and warnings. The attack is so powerful, it lights Shotaro on fire and severely injures him.