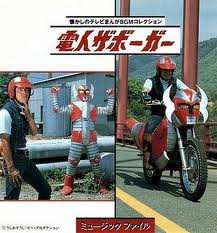 Denjin Zaboga (translated into Electro-Man Zaboga) is a Tokusatsu show made in 1974. The story revolves around Yukata Daimon, a Secret Police agent who returns to Japan after he learns of his father's murder. Discovering that the criminal organization SIGMA is responsible, the Hot-Blooded Yukata vows to bring the organization and it's head, Dr. Akunomiya, to justice. To help him in his quest, his father posthumously gives him Denjin Zaboga, a powerful robot who an transform into a motorcycle. Using a helmet with a microphone attached, Yukata can order Zaboga to transform, utilize special attacks or deploy a small secret car or helicopter from his body. Yukata is joined by a younger agent Ken Matsue, and with his bazooka armed bike, Zaboga gets the form Strong Zaboga to fight a new enemy, the Dinosaur Army.

and the movie was released on home video (US included, as Karate Robo Zaborgar).