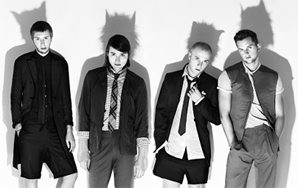 Brave. Bulging. Buoyant. CLAIRVOYANTS!
"What's so wrong with just a little fun?
We still got the taste dancin' on our tongues."
Advertisement:

Wild Beasts were an acclaimed English indie band, who initially formed in Kendal as a duo of vocalist/multi-instrumentalist Hayden Thorpe and guitarist Benny Little. Taking their name from the Fauvism art movement of the early 20th century (fauve meaning "wild beast" in French), they relocated to the far less remote city of Leeds where they were eventually joined by fellow Cumbrians Chris Talbot (drums) and Tom Fleming (bass, vocals, multi-instrumentation).

From the beginning a lot of attention was drawn towards Thorpe's peculiar vocals - which can be best summed up as an operatic falsetto prone to becoming heavily strained and throaty - that initially led to the group being dismissed as divisive. However, the whimsical yet provocative nature of their songwriting, reverb-drenched guitars and tight rhythm section received favourable comparisons to The Smiths. After signing to Domino the band recorded their debut album, 2008's Limbo, Panto with Franz Ferdinand producer Tore Johannson, and was very much a showcase for these eccentricities.

They followed it up a year later with Two Dancers, which toned down the erratic tendencies of their music by placing a stronger emphasis on rhythm, with their overall style becoming more and more inspired by Dream Pop in the process. Thorpe's singing voice too became much more refined whilst retaining his distinctive falsetto, and has began to share vocal duties with the lower-registered Tom Fleming. Many hailed the record as a major improvement in quality, as the album went on to receive rapturous acclaim as well as a Mercury Prize nomination in 2010 (which lost to former tourmates The xx, by the way).

Album number three Smother (2011) stripped their sound down ever further, introducing hazy electronic textures that often stray into Post-Rock territory alongside a more introspective tone in subject matter. Once again the reception has been overwhemingly positive, and the band's switch to a synth-orientated sound led to a high-profile collaboration with Lady Gaga, remixing her track "You & I" to much acclaim.

In 2014, the band announced the release of their fourth album Present Tense, which compared to the relatively quick recording process of their previous work, took longer to gestate over a period of 18 months. Even more synthetic in nature than Smother with guitars only used sparingly, the band opted for a more direct and in-your-face approach than its' precedessor, with the overall sound reminiscent of 80s' New Wave & SophistiPop combined with the trademark Wild Beasts touch. It also became their first to crack the top 10 album charts.

In 2016, the band went to Dallas to record Boy King, a Concept Album which tackled masculinity and the dark side of the male ego. The album continues the band's flirtation with electronics, whilst also playing with a even more diverse range of styles such as R&B, Alternative Rock and Industrial music.

On September 25th 2017, Wild Beasts announced that they were calling it a day, and performed their final show in February 2018. Since 2019, Thorpe and Fleming have gone on to pursue solo careers, releasing the albums Diviner and One True Pairing respectively.

The band and their music provide examples of the following tropes: