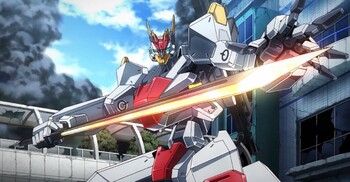 A series with one or more pieces of (usually highly advanced) technology as a significant main character. Most of these are Mecha, of either the Real Robot or Super Robot subclass, but it is equally true of shows with cool bikes, high tech body armor, amazing racing cars, and space fighter craft.

Almost any genre of story can — and has been — combined with the Mecha Show. Any Japanese Sci-Fi series is almost certain to feature one or more machines in a starring role, as well as most Steampunk, Cyberpunk, and even Heroic Fantasy.

The most important part is that the focus of every episode is on the cool characters doing cool stuff with their cool toys.