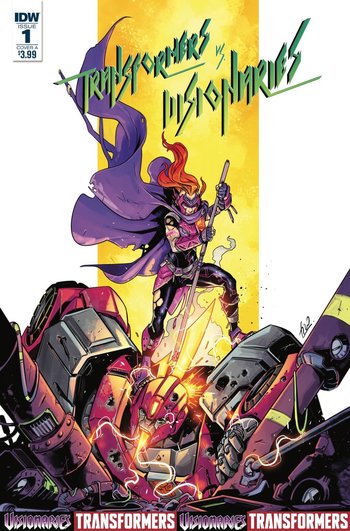 Do you believe in magic?
"Consider this a warning, Transformer. Cybertron will be ours."
— Virulina
Advertisement:

First Strike ended with Garrison Kreiger revealed as the magical Merklynn, scion of the lost world of Prysmos and hell-bent on restoring his culture to its former glory by any means nessecary. He got his wish... kind of.

As Cybertron's new government struggles to pick up the pieces, the Transformers turn their attention to the colony of "New Prysmos" underground, populated by the last vestiges of the Prysmosian race. But the Darkling Lords aren't pleased with the prospects of having to share their new home with a civilization of mechanical beings, and — urged on by Merklynn — plan to remake Cybertron into a copy of their lost homeworld with the power of the arcane Talisman... and not even the vaunted super-science of Cybertron can stand up against such an onslaught. The only hope for the Transformers lie with Leoric and his Spectral Knights, but can two such diametrically opposed powers put their differences aside?

Part of the Hasbro Comic Universe, Transformers vs. Visionaries is a 5-issue miniseries written by Magdalene Visaggio (Kim & Kim) and illustrated by Fico Ossio (Revolutionaries), featuring the introduction of the Visionaries into the universe while delving deeper into the mysteries of the always-enigmatic Talisman.