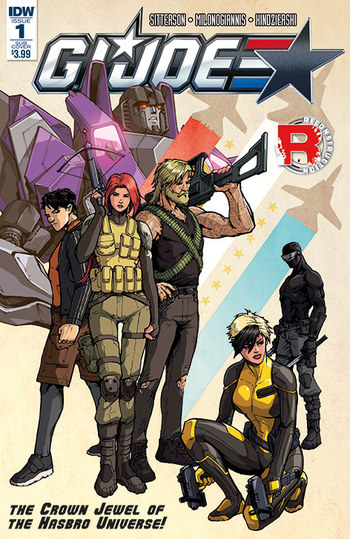 The heroes you remember from your favorite childhood cartoons. Both of them.
"Attention, vermin! I am Skywarp, of the G.I. Joe International peacekeeping initiative! Drop your weapons and surrender immediately! I don't want to have to clean what's left of you off my feet."
— Skywarp
Advertisement:

Years previously, G.I. Joe was formed as an elite anti-terrorism task force, protecting the United States against the forces of the totalitarian organisation, Cobra; but in the two years since Cobra's collapse, G.I. Joe have been deemed unneeded, and quietly mothballed.

Then their world got a whole lot bigger.

In the aftermath of the Revolution, G.I. Joe are back, and ready to defend the Earth from Dire Wraiths, Decepticons, and other villains. Armed with new Cybertronian weapons and a worldwide mandate, the Joes are no longer just real American heroes — they're real Earth heroes! To this end, they'll be solving problems across the planet, and recruiting team members from outside the USA... like, er, Skywarp!?

Illustrated by Giannis Milonogiannis (All-New Ultimates, Bebop and Rocksteady Destroy Everything) and written by Aubrey Sitterson (G.I. Joe vs. Street Fighter), the series is being pitched as the "Crown Jewel of the Hasbro Universe" — a statement of their intent to breathe new life into one of Hasbro's oldest home-grown franchises.

The series was set to conclude in August 2017 with issue #9, before it relaunched post-First Strike as Scarlett's Strike Force, set to debut in November of 2017. However, demand for Scarlett's Strike Force, as per IDW, was so low that the series was canceled before the first issue was published, ending at 3 issues and a brief backup story in Transformers: Unicron #2.