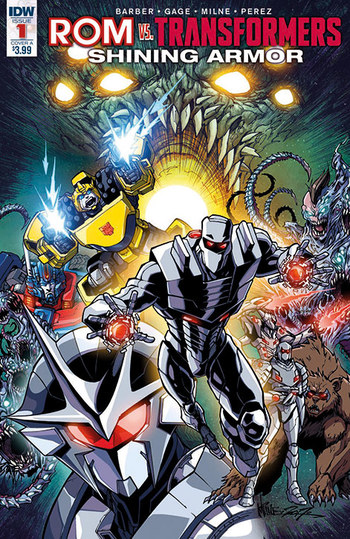 Two worlds... no family.
"The whole universe knows more about me than I do... and they all hate me."
— Stardrive
Advertisement:

Meet Stardrive! She's exactly what you'd expect to see in a model Space Knight cadet: loyal, friendly, dedicated to protecting the innocent from the evil Dire Wraiths, and a firm believer in the compassionate ideals of her mentor Rom. So why doesn't anybody in the Solstar Order seem to like her?

Maybe it's just because of one itty-bitty detail: she happens to be a 18-foot tall robot capable of turning into a car.

Autobots might wage their battle to destroy the evil forces of the Decepticons, but their penchant for collateral damage means that Cybertronians aren't the most popular species in the galaxy - a sentiment that the orphaned Stardrive learns the hard way as she grows up in the care of the Solstar Order. When a diplomatic mission to the backwater planet of Xetaxxis goes awry, Stardrive is caught between two worlds after Starscream's Decepticon-Wraith alliance targets her, forcing Bumblebee and Ultra Magnus to intervene. When these two worlds violently collide, Stardrive will have to decide where her true loyalties lie...

Part of the Hasbro Comic Universe, Rom vs. Transformers: Shining Armor is a miniseries written by John Barber (The Transformers, Revolutionaries) and Christos Gage (Rom) and illustrated by Alex Milne (More Than Meets the Eye), exploring the galactic community during the height of the Autobot-Decepticon war set in the little-explored era before the Infiltration miniseries.