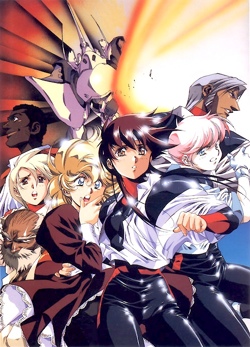 Plastic Little is a Seinen Anime created by Satoshi Urushihara and Kinji Yoshimoto at studio KSS. It was published in Japan as a one-shot OVA on the 21st of March, 1994. It was first released in North America on VHS by ADV Films; in 2001 ADV announced that the Anime would be released on to DVD on February 5, 2002.

Later adapted into a single volume Manga released in May 2004, published by Gakken and featured in Comic Nora. The manga continues on the plot of the original OVA.

The story involves Tita Mu Koshigaya, a young woman in the skies of Ietta who captains the ship Cha-Cha Maru, and who collects exotic animals for sale to zoos for profit. The captain becomes involved in a war of international importance when her Love Interest and shipmate Elysse is tracked down by a militant force, led by the armored man and aspiring conqueror Guizel, intent on discovering a secret that may serve the deciding factor to the world's future. Both incarnations of the story include an action/adventure plot stimulated with heavy character interaction and much Fanservice as common for a Satoshi Urushihara work.