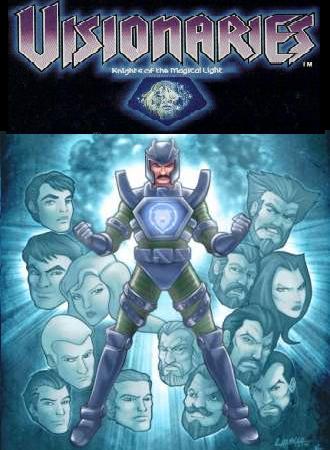 Fan art of the main cast by Leanne Hannah.
"It is a time where magic is more powerful than science, and only those who control the magic control destiny. They are the Visionaries."
—Opening Narration
Advertisement:

Visionaries: Knights of the Magical Light is an Animated Series from 1987 co-produced by Hasbro, Sunbow Entertainment and TMS Entertainment. Originally conceived as an action figure toyline, the franchise had both a cartoon and a tie-in comic book to help promote it. Unfortunately, the show only lasted thirteen episodes and the comic series was cut off mid-storyline.

Visionaries is set on the planet of Prysmos, where its three blazing suns have recently gone into convergence — signaling the end of the Age of Science and the rebirth of the Age of Magic. As all their previous technology has now gone dead, its people quickly revert into a feudalistic medieval lifestyle. Shortly thereafter, the wizard Merklynn announces a challenge: all those who can reach his shrine will be granted powers of transformation and other magical powers. The show follows the fourteen successful characters: the good Spectral Knights and the evil Darkling Lords.

December 2015 saw Hasbro and Paramount announcing a shared Hasbro cinematic universe (with the recent G.I. Joe movies as the start), which will include reimagined versions of this show, M.A.S.K., the Micronauts and ROM. 2017 saw the announcement of a Visionaries comic from IDW Publishing to be set in the Hasbro Comic Universe, with a brand-new Leoric figure included as part of a Revolution-themed set of figures.

In 2018, the characters appeared in an IDW mini-series comic book called Transformers vs. Visionaries, in which they underwent many changes.

Tropes of the Magical Light: