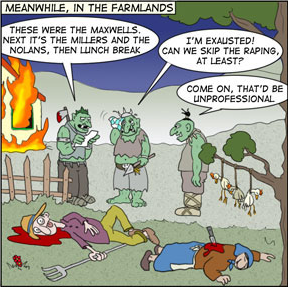 Maxim 1: Pillage, then burn
Taggart: We'll work up a Number 6 on 'em.
Hedley Lamarr: [frowns] "Number 6"? I'm afraid I'm not familiar with that one.
Taggart: Well, that's where we go a-ridin' into town, a-whompin' and a-whumpin' every livin' thing that moves within an inch of its life. Except the women folks, of course.
Hedley Lamarr: You spare the women?
Taggart: Naw, we rape the shit out of them at the Number Six Dance later on!
Hedley Lamarr: Marvelous!
— Blazing Saddles
Advertisement:

One of the many ways your hometown can become a Doomed Hometown. A group of bandits, pirates, or even mooks working for a Big Bad cause trouble primarily by sacking the town—that is, looting, damaging property, and sometimes even murdering and kidnapping innocent townsfolk. Raping is optional(-ly shown), but the town is almost always burned down afterward. This gives an excellent opportunity for the bad guys to Kick the Dog. Rape, Pillage, and Burn is guaranteed to appear in any work involving Pirates or Horny Vikings. Sometimes appears, though not as frequently, in The Wild West or Medieval European Fantasy. This activity is a common pastime of The Horde.

This is one way to gain Plunder. If this problem persists, villagers may resort to hiring The Magnificent Seven Samurai.

Truth in Television; historically, this was known as "chevauchée."

This is generally a problem in areas without a strong government to keep order, even today. In many civilizations, it was not resolved until power, money, and land were consolidated under noblemen and kings rich enough to afford standing armies. It is also one reason why peasants in older times tolerated kings and nobles who were quite nasty, as the alternative was almost always constant chaos caused by dozens and dozens of rival warlords (although they could still suffer this in wars the nobles or kings waged with each other). These days, this trope is considered a Crime Against Humanity.

It should be noted that as nasty as this trope can get, it's not entirely unjustified in terms of cold hard pragmatism, at least in less civilized settings. It provides food, supplies, and funds for an army far away from home which is in constant need of all three. It raises morale among the attacking forces, demoralizes the victims, and builds a fearsome reputation that can be used to coerce surrender. The downside is that it creates a lot of resentment from the population, turns enemy troops fanatical and invites reprisals, damages the economic value of the area you conquer, postpones cultural assimilation by decades, and can become addictive to the troops, which is a big problem when they return home. Even "good guys" like Lincoln in the Civil War were known to order pillaging because supply issues were making the army tactically sluggish, along with burning crops in the South to destroy their resources and hasten a surrender. Also, rape can mean multiple things. One of the more archaic definitions is "to capture" (although this was frequently to commit sexual assault later, thus the changing meaning).

And remember, to avoid (even more) squick or damaged goods, it's rape, pillage, then burn.