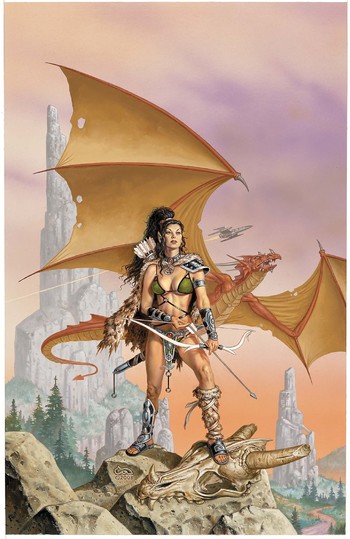 In the front: Bast the Wood Elf (cover art by Clyde Caldwell)
A series of books by John Ringo that takes place in the 41st century. Advanced nanotechnology, teleportation, and other technologies which are essentially Clarke's law made real have created a utopian society. All of this is controlled and coordinated by an Artificial Intelligence called Mother.
Advertisement:

A factional split between two groups within the Council, the group that partially controls Mother, results in all-out war, including cutting off power to the rest of the world, which in turn results in everyone being Brought Down to Normal. Some people die instantly when their protection or systems fail. Others die from the ensuing battles with the Social Darwinist faction of New Destiny.

The series follows the Council members as they fight the New Destiny faction, and the Muggles who just try to survive the Fallen world, using methods vaguely remembered from historical reenactments.

, which is what happened when racism met Chicago's machine politics in the worst possible way.