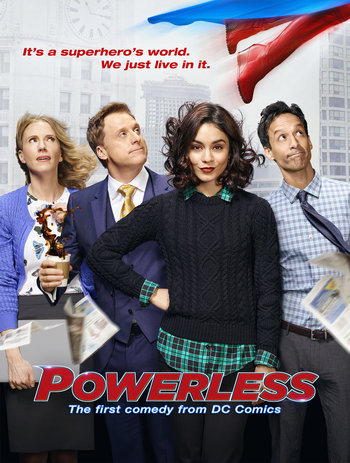 "Sell them a key that keeps shrinking to nothing so they can never find it when they need it… Of course, it's very hard to convict anyone because no Muggle would admit their key keeps shrinking—they'll insist they just keep losing it. Bless them, they'll go to any lengths to ignore magic, even if it's staring them in the face…"
— Arthur Weasley, Harry Potter and the Chamber of Secrets
Advertisement:

In a story with Differently Powered Individuals, you'll usually have a group of individuals who don't have those powers—muggles. Ordinary people. Those who are not special, like the favored of the plot. Mundane folk who are only aware of their own small section of reality. The source from which most characters spring.

They're the "normal" for those who crave it and those who would hate it if it happened. Ironically, Muggles often treat extraordinary people like crap, because Muggles are All of the Other Reindeer—although sometimes this happens the other way around, more cynical super-people looking down on them as Innocent Bystanders—a pathetically bland, underdeveloped species.

The most common Secret Identity pretends to be this.

They are the ones whom the Masquerade is used to hide from, who can't get into (or perhaps even perceive) the Wainscot Society, and the ones who are subjected to memories wipes simply so the more enlightened can retain their secret status. Sometimes reality itself conspires to hide the plot from their minds, in ways like the Extra-Strength Masquerade, Bystander Syndrome, Weirdness Censor, and Invisible to Normals. Then again, they may just not want to know because Apathy Killed the Cat.

Muggles are to be protected, avoided, manipulated, or abused (in any combination) by the characters or the plot.

Expect the Red Shirts to be muggles since non-muggles are usually too plot-valuable to waste. Even muggles with characterization need to watch it: they could be Mauve Shirts. More rarely, Muggles Do It Better comes in to play: mundane people with mundane technology have a real fighting chance in works featuring this trope (often the reason why The Masquerade exists—otherwise, once the Witch Hunt starts, the supernatural would get its butt handed over by Badass Normal hunters or mobs with Torches and Pitchforks).

Not to be confused with Moogles or Buggles. Certainly not to be confused with The Legend of Rah and the Muggles. It also has nothing to do with marijuana unless you're reading vintage crime fiction.note Rowling says she took it from the word "mug" meaning "fool," which is possibly derived from the Irish mug, "slave".