Literature / The Legend of Rah and the Muggles 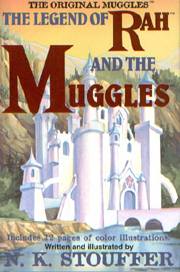 The Legend of Rah and the Muggles is a children's book written and published by Nancy Katherine Stouffer (also referred as "N.K. Stouffer") in 1984. The book languished in obscurity until 1999, when Stouffer sued J. K. Rowling (author of the wildly popular Harry Potter book series) for intellectual property damages, claiming that Rowling had stolen elements from Rah and used them in the Potter books without permission, primarily the use of the word "muggles". The subsequent lawsuit was eventually laughed out of court, as Stouffer was unable to verify her claim that she originally trademarked the term (even the title is a modification; it didn't originally feature the word "muggles" when it was released, that being something Stouffer added later to increase her chance of winning the lawsuit).

The tale opens with a nuclear war caused by government corruption, in a way that's guaranteed to send any 6-year-old to a somewhat restless sleep, followed by an Author Filibuster about the abuse of eminent domain laws. If this jars with the colourful Fairy Tale kingdom depicted on the front cover (which in fairness isn't too bad) then it should. It's like watching an episode of Handy Manny with explosions and genocide. The title character somehow brings sunlight back to the land of the Muggles, who evolved implausibly quickly from the survivors of the apocalypse. No attempt is made to Hand Wave the conditions After the End that led humanity down that particular evolutionary path, let alone with such speed. The subsequent chapters present a disjointed and incoherent account of the lives of Rah, his brother Zyn and the Muggles, as several years will often be skipped in-between chapters.

Simply put, Rah and the Muggles is to children's literature what The Eye of Argon is to swords and sorcery, minus the unintentional hilarity. For a chapter-by-chapter breakdown of the story, this link

should tell you just about all you need to know. If you want to know more, see Zelda Queen's more detailed dissection.

Or you could buy the book.