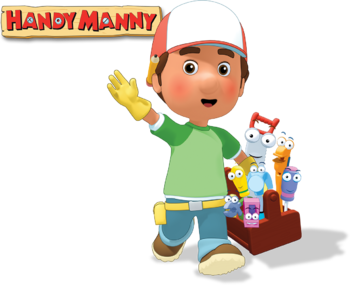 Handy Manny is a CGI series that ran from 2006 to 2013. It originally aired on the Disney Channel's Playhouse Disney block and was carried over when the block was rebranded as Disney Junior. It is also now being aired on the 24/7 Disney Junior network and is available on Disney+. It is described by many to be Bob the Builder meets Dora the Explorer.

The show stars Manuel "Manny" Garcia, a Hispanic handyman living in the fictional town of Sheet Rock Hills. He's aided in his repairs by his team of talking tools: Dusty the saw, Pat the hammer, Felipe the Phillips head screwdriver, Turner the slotted screwdriver, Rusty the pipe monkey wrench, Stretch the tape measure, Squeeze the pliers, and recent addition Flicker the flashlight. The rest of Sheet Rock Hills is filled out by an ever-growing list of inhabitants, both friends and return customers of Manny's, and several one-off customers appearing in a single given episode.

While it's a show written for preschoolers, if you start asking around you begin to see it has a growing Periphery Demographic, even if some people will only claim to watch it because their child/niece/dog watches it.

The show also has a spin-off, Handy Manny's School for Tools.

A slightly shortened version of the opening theme.

A slightly shortened version of the opening theme.