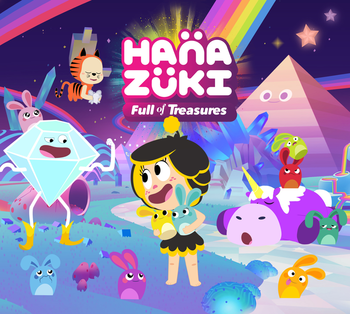 She powers her world.
"Out there, deep in space
Grows a new Moonflower
That blooms in every way
When she treasures her moods
She finds her power
To discover a new day...
Hanazuki!"
— Expository Theme Tune
Advertisement:

Hanazuki: Full of Treasures is a 2017 Web Animation digital series created by Hasbro and Titmouse, with Dave Polsky (of My Little Pony: Friendship Is Magic and The Buzz on Maggie fame) serving as co-producer and story editor. The series is based on the ideas of Niko Stumpo and partner Hanneke Metselaar after Hasbro's acquisition of the brand.

Somewhere in a faraway galaxy of moons called the Lunaverse, a childlike being named Hanazuki is born on a particular moon populated by an assortment of colorful characters, including the adorable bunny-like Hemkas. Hanazuki is a Moonflower, the guardian of her moon, who possesses the ability to grow magical Treasure Trees from assorted "treasures" delivered by the mysterious Little Dreamer. It isn't long before Hanazuki discovers that the galaxy is threatened by the Big Bad (yes, that's what it's called), a terrifying force of darkness that has left countless other moons destroyed in its wake. To prevent the same fate from befalling her home, Hanazuki has a simple task: to grow as many Treasure Trees as she can by understanding and harnessing the power of her emotions, with a little help from the Hemkas and her other friends. Of course, she's not the only Moonflower in the galaxy with this duty—and not all of them are so happy to see her succeed...

The show's first season was released as three sets of nine episodes (27 episodes) coinciding with a full moon on the lunar calendar on YouTube and its kid-friendly app, YouTube Kids for free. The series has been renewed for two additional seasons, and a series of shorts

released between the first and second seasons, including one

that was produced for theaters and featured with My Little Pony: The Movie (2017). There's also a full-length theatrical film

The series premiered on Discovery Family in the United States on December 1, 2018. Aired early in Russia and the UK and Ireland, the second season officially premiered in the US on March 23, 2019.

"Sometimes...
Feels like I've waited my whole life
For that perfect moment where the sun shines
Straight through my soul again
Out late
Running away from things we should face
Don't need a reason why we celebrate!
Feels like I'm born again...