In General
Moonflowers are magical flower-like children who are assigned as guardians of the moons of a faraway galaxy. To do this, they must plant mysterious "treasures" to grow Treasure Trees, which can only happen when they feel a certain mood.
Advertisement:
Hanazuki 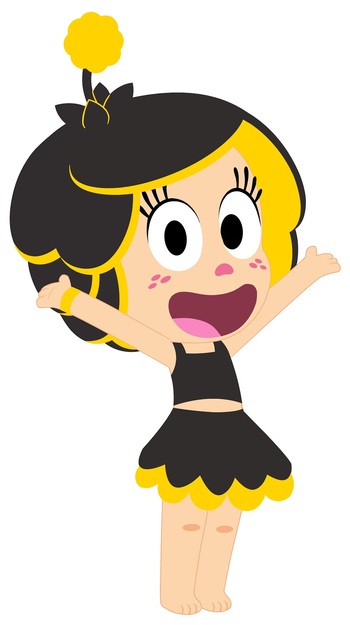 A freshly born Moonflower assigned as a guardian of the Hemkas' moon. Ever cheerful and boundlessly optimistic, Hanazuki spends each day learning more about her moods, duties, and what kind of threats she faces. 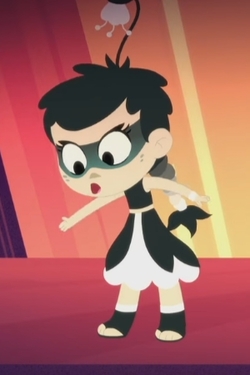 An older, cynical Moonflower from another moon that was destroyed by the Big Bad. At first she thinks Hanazuki will fare no better at protecting her moon than she or any of the other Moonflowers have, but she soon takes an interest in Hanazuki's success at growing Treasure Trees. 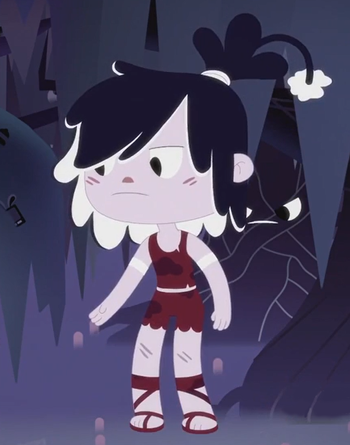 The Moonflower of Sleepy Unicorn's old moon, deposed by the evil Twisted Unicorn. He only knows how to grow black Treasure Trees, stemming from his complete lack of self-esteem (which cost him his position as the Unicorn Moon's guardian when the Twisted Unicorn took matters into his own hands), and turns to Hanazuki for guidance to restore peace to his moon. 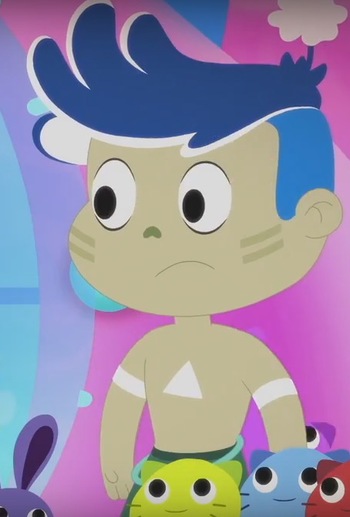 A Moonflower from an oceanic moon that suddenly froze over and shattered, though with enough warning that he and his companions, the Flochis, could evacuate to Hanazuki's moon. When trouble arises, Maroshi prefers to go with the flow and ride his problems out. His main method of transportation, a surfboard, allows him to travel through space as well as do normal surfing, one of his main hobbies. 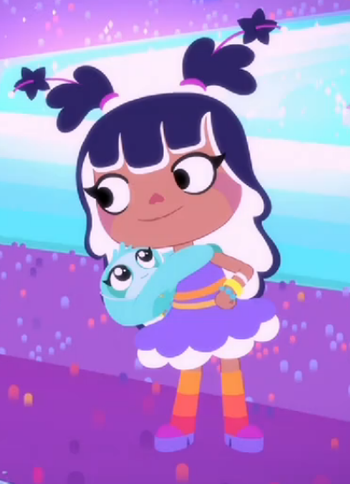 A Moonflower that appears in the second season of Hanazuki Full of Treasures.

A black, doglike Alterling who lives alone together with Kiazuki. He has a very feisty temperament, but wants nothing more than Kiazuki's approval.

The Alterlings that inhabit Kiyoshi's moon. They possess incredible magic powers, but spend more of their time fighting each other than working together.

The cat-like Alterlings of Maroshi's moon. They have the ability to "swim" across any surface, and always move together in unison. The one exception is Wanderer, a lavender Flochi who prefers to go off and do her own thing.

Miyumi's Alterling friends, who are incredibly sweet but as slow-witted as they are slow-moving.

A chill unicorn with magical powers who hails from Kiyoshi's moon, but has since made his home with Hanazuki. He loves to sleep just about as much as he hates talking about himself, which is a lot. One thing's for certain: there's something much more to him than he lets on.

A dancing and singing diamond who acts as the self-appointed sheriff of Hanazuki's moon.

A plant that mimics whatever the person or creature closest to it is thinking or saying.

A type of giant, tentacle-mouthed monster that inhabit numerous moons. There's one that lives on the Dark Side of Hanazuki's moon, which she eventually befriends.

A lovable hotdog-man with an uncontrollable appetite, which ended up getting him exiled to the Dark Side of Hanazuki's moon.

A megalomaniacal brain who lives in a cave on the Dark Side of the moon. He has designs for total domination of Hanazuki's moon, but lacks the necessary body parts to carry them out.

Sleepy Unicorn's brother, who took control of their original moon away from their Moonflower and drove Sleepy into exile. He and his brother understandably don't like each other very much these days.

Depriva
Voiced by: Jennifer Hale
Enormous Coal
Voiced by: Dino Andrade
Axo
Voiced by: Gary Anthony Williams
A giant Axolotl who works as the security guard for the Party Cube.
Pyramid with a Face
Voiced by: Michael Sinterniklaas

A talking pyramid and frequently seen landmark on Hanazuki's moon.

A mysterious baby who is always floating through space and always sleeping. He gives life to the Moonflowers and helps them with their responsibilities by delivering the treasures they need to grow Treasure Trees.

The Big Bad
An inky black cloud of darkness that threatens to destroy all the moons in the galaxy. It is every Moonflower's duty to stand against this force of evil, but none have been able to hold it back for long.