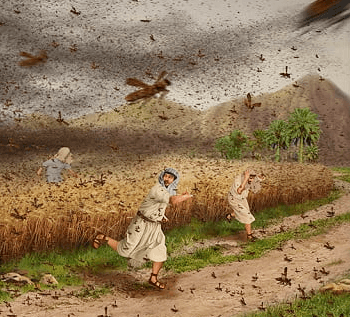 I send the locusts on a wind, such as the world has never seen.
On every leaf, on every stalk, until there's nothing left of green!
"Oh no, not the bees! Not the beeeeeeeeesssssss! ARGGHHHHHH! They're IN MY EYES! MY EYEEEEEES!"
— Edward Malus, The Wicker Man (2006)

A whole hell of a lot of little ones.

With monsters, bigger is not always better. Sometimes tiny can be terrifying if you have overwhelming numbers working for you. Nature has plenty of examples of this and many of them have found their way into the movies. Swarming bees, ants, locusts, piranha, etc. have all frightened moviegoers. Sci-Fi and Horror have added swarming terrors that go beyond things found in the back yard.

The promise of nanotechnology also has a dark side. Microscopic machines rampaging across the countryside disassembling everything they encounter in their quest for raw materials with which to bolster their numbers is the latest paranoid fantasy. Alien creatures brought back to Earth because they were tiny and thought safe can multiply at prodigious rates to become a ravening horde consuming everything in their path.

The Swarm can also ramp up the horror by having the tiny critters invade the bodies of their victims through any convenient orifice so the victim can be consumed from the inside out.

Some variants of this trope, namely Bee Afraid, Spider Swarm and Swarm of Rats, have their own pages.

Sometimes overlaps with Hive Mind if all the swarm share one mind. Alternately a Mind Hive controlled swarm serve as Animal Eye Spies to one external controller. If they take a humanoid form, they could be The Worm That Walks. Tactics typically take the form of the Zerg Rush. Often found in a Hornet Hole. When they are aliens then its also a Horde of Alien Locusts. When a swarm's sudden appearance frightens characters and audience, yet turns out to be harmless, it's a Bat Scare. If the horde consists of Nanomachines, then it's Grey Goo.

Not to be confused with The Swarm, which does feature a swarm of killer bees.