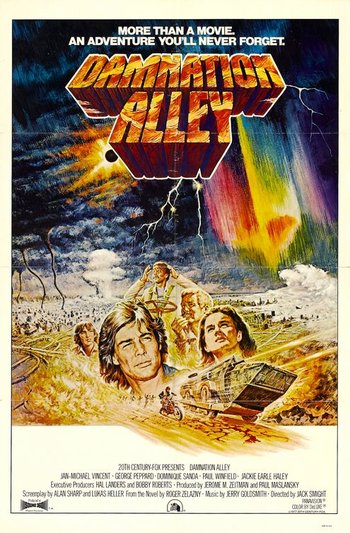 Damnation Alley is a 1977 science-fiction thriller set in a post-apocalyptic world, very loosely inspired by the novel of the same name by Roger Zelazny.

World War III happens. The crew at a remote U.S. Air Force missile base survive the war, but following an accident which kills several of them and destroys most of their supplies, the remainder decide to make their way across the country to the only part of the U.S. that is still inhabitable. Unfortunately, the only way to get there is a narrow strip of not-quite lethal wasteland, dubbed by the leader of the expedition as "Damnation Alley". As the name suggests, it's no picnic. They set out in a pair of "LandMaster" armored vehicles, encountering various dangers and other survivors as they travel east.

The LandMaster prop is arguably the best thing in this movie, and went on to have almost as long a career in cinema as the human star, Jan-Michael Vincent.

Best known for being the blockbuster 20th Century-Fox was expecting in the summer of '77, if not the one they got.