Fanfic / The Flight of the Alicorn 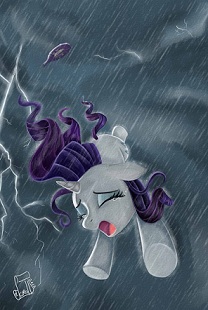 The situation isn't as bad as it looks... honest.
Advertisement:

The Flight of the Alicorn

is a My Little Pony: Friendship Is Magic fanfiction by Ponydora Prancypants.

Rarity's exploits in "Sweet and Elite" set in motion a chain of events that will find the unicorn dressmaker taking part in the greatest airship race in the world, the Alicorn's Cup. Excitement will give way to terror, as Rarity soon finds herself the victim of a plot against Equestria, and shipwrecked far from home with her least favorite stallion, the boorish Prince Blueblood. Rarity will learn of treachery in Canterlot and abroad, and will have search for something of substance beneath the prince's obnoxious veneer as she struggles to not only save herself, but her entire nation.

Book One of The Adamant Triskelion, which was originally planned to be a trilogy. The second Book, The Abyssal Forge, is a Dead Fic since its last update was back in 2013.

The Tropes of the Alicorn: