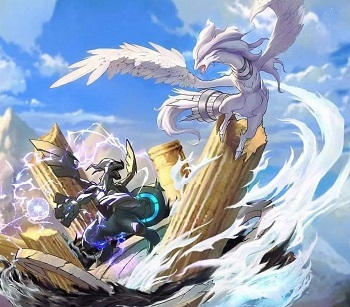 "Darkness rises, and Light to meet it."
Two forces exist within the same 'Verse. Both of them are unbreakable absolutes. And they are diametric opposites.
Advertisement:

There are several possible outcomes:

In the West, the Unstoppable Force Meets Immovable Object conundrum is the most famous version of this, enough so that it's become a Stock Phrase. The Eastern equivalent is the unstoppable sword and unbreakable shield (see Folklore, below)—the Chinese word for "contradiction" is derived from this.

Please note: This is for actual, absolute forces. See Unstoppable Force Meets Immovable Object for the use of that particular stock phrase to refer to objects or people who aren't absolutes.

Compare Balance Between Good and Evil and Light/Darkness Juxtaposition, which may be represented with this. If the two characters are not life and death personified as absolutes but have these as motifs anyway, that's Life/Death Juxtaposition. Contrast Yin-Yang Bomb when someone sniffs at the idea of opposing yin-yang sides and points out that the two actually complement each other — in a powerful way.