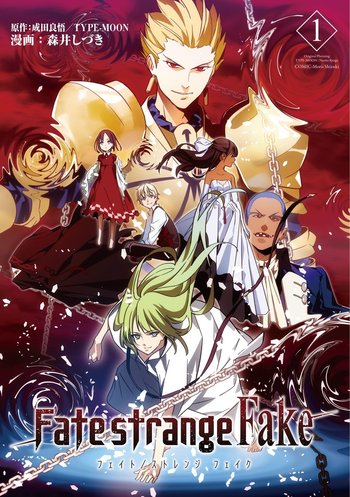 Truth, at times, crushes the world’s lies,
But it cannot erase the ‘truth’ that ‘the lies were there.’
Not even with the power of the Holy Grail.
Volume 1 Epigraph
Advertisement:

A Light Novel and manga series set in the Fate universe, written by Ryohgo Narita (author of Baccano!), which began in January 2015 and is currently ongoing. Seven volumes of the light novel have been published as of March 2022.

Fate/strange fake originated as an April Fools' Day prank in 2008, when Ryohgo Narita posted a novella on his website (originally titled Fake/states night) that was seemingly a prologue to a (fictional) upcoming Fate video game. Although the text was taken down from Narita's site after only one day, the novella was later included as a bonus with the second issue of the Type-Moon ACE magazine, with an afterword by the author and illustrations by Shizuki Morii. No actual continuation seemed to have been planned, making the whole thing an introduction to a cast of characters who would likely never be seen again... but eventually it was decided that the concept was too good to waste and Fate/strange fake was turned into a real instalment of the Fate franchise, with the original novella making up the bulk of the light novel's first volume.

The story centers around a False Holy Grail War, faultily copied from the Third Holy Grail War, in Snowfield, a small town in Nevada (California in the previous version), years after Fate/hollow ataraxia. Seventy years before the events of Fate/stay night, at the time of the Third Holy Grail War, a group of mages separate from the London-based Mage Association decided that they would copy the ritual. Okay, they were only able to steal parts of it, but they could fill in the blanks for the rest. (Yes. They're fudging a ritual that involves a hole in reality, the most powerful and bloody legends brought to life, and a fight where There Can Be Only One.) They completely lost the Saber template, the definition of "Hero" gets even more blurry, and the participants are less sane. And nobody paid attention to the clusterfucks that were the Third, Fourth, and Fifth Grail Wars. Oh, and most of the participants seem to have missed the memo that Holy Grail Wars are supposed to be a secret.

This will end well.

So, those independent mages, working with the U.S. Government, manipulated events in Snowfield, Nevada (just north of Las Vegas) to replicate the Sacred Land needed to generate a Grail.

And as it happens, the False Holy Grail War is only a cover to generate the energy for a True Grail War...